Toronto, Ontario–(Newsfile Corp. – May 4, 2020) – GoldSpot Discoveries Corp. (TSXV: SPOT) (“GoldSpot” or the “Company“) is pleased to announce that Manitou Gold Inc.’s (“Manitou“) successful drill target intercepts in drill hole MTU-20-14 located on the Patents Property at the Goudreau Project in northeastern Ontario provide early confirmation of GoldSpot’s machine learning (artificial intelligence) – prospectivity mapping in that area. While these results are from one hole only and there can be no assurances that additional drilling will continue to yield such positive results, management of GoldSpot is encouraged by the solid data received by Manitou to date. The major structure intersected at the Patents Property is directly within GoldSpot’s previously highlighted prospective zone and conforms to the Company’s proprietary structural geology interpolation mapping techniques (see the prospectivity and structural interpolation maps, below). GoldSpot’s prospectivity assessment work results from the integration of new field data collected by Company geologists in the summer of 2019, integrated with publicly available geophysical data and filed assessment reports.

“We are highly encouraged with our initial drilling of the Patents Property, which resulted in the intersection of gold grades similar to those intersected at the Island Gold and Edwards Mines immediately to the west of the property,” stated Richard Murphy, President and CEO of Manitou. “I look forward to the continued drilling at this property as work at adjacent mine properties suggest both gold grades and widths of mineralization can increase with depth. We are also eager to follow up on other areas of our properties interpreted as having high prospectivity through the GoldSpot process.”

2019 field work provided essential insights on the structural setting and overall controls on mineralization in the area and resulted in a useable dataset for the machine learning exercise. Field work was also essential to perform quality control on historical data to better integrate it in the prospectivity analysis.

Insights gained through field work allowed the selection of the ideal input variables (features) and the optimal approach to engineering them for the prospectivity analysis.

Success of a machine learning system in assessing gold prospectivity relies on the quality and relevance of its input variables, which in turn is directly related to the design quality of the field data collection program and a comprehensive geological understanding of the area. GoldSpot employed several techniques to develop a successful machine learning – assisted prospectivity map, which include:

Below is a brief overview of a selection of products generated by GoldSpot which were used in the targeting process on the Patents Property.

Narrowing down the search area

Study of known deposits and mineral occurrences in the area revealed the importance of local to regional scale deformation zones in the development of fertile vein systems. GoldSpot focused its efforts on better defining known and identifying new deformation zones within the Patents Property. Historical structural (Heather and Arias, 1992) and 1:50k scale geological mapping (Bruyere and Riggs townships; Walker, 2018 and Srivastava and Bennett, 1978) from the Ontario Geological Survey (“OGS“) have very coarse resolution within Manitou’s Goudreau Project and the Patents Property due to limited road access, water bodies and extensive boreal forest cover. 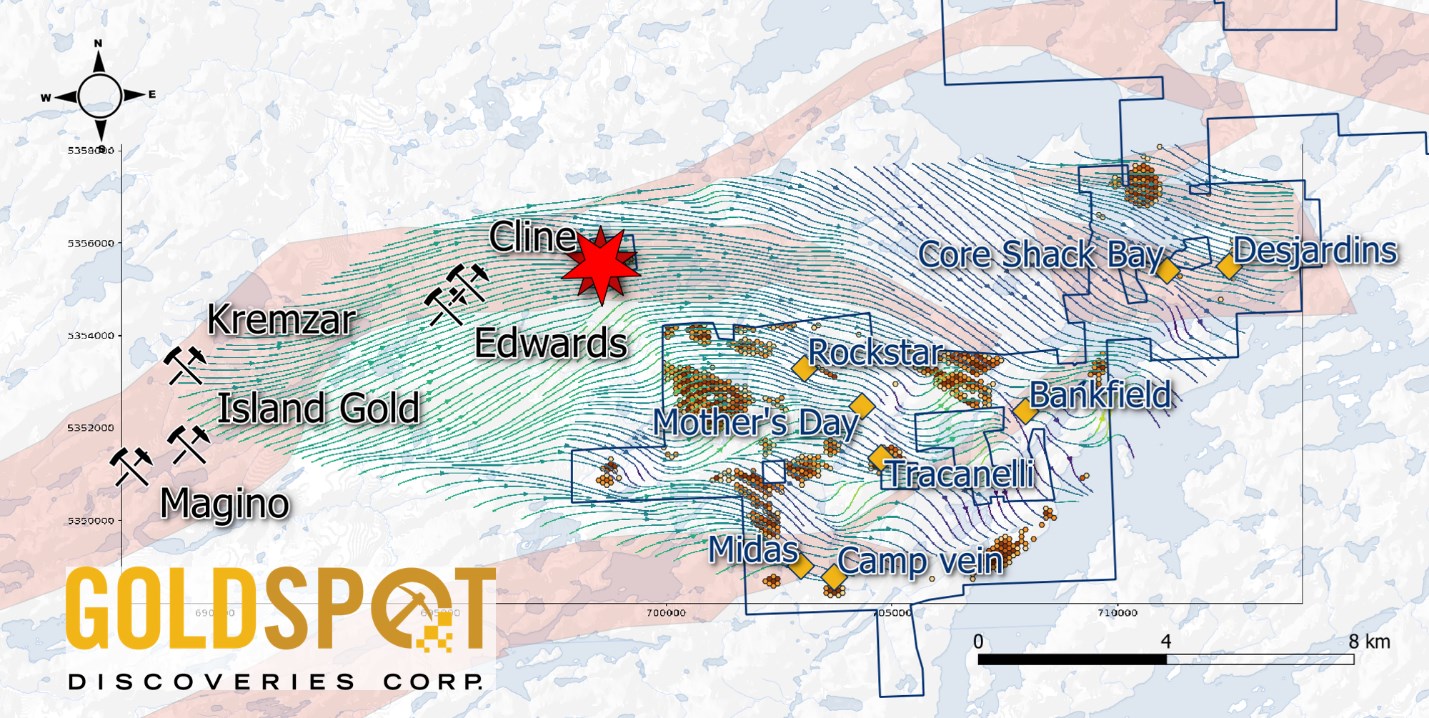 Lithological contacts juxtaposing rocks with contrasting rheology is an important factor for vein development, with gold-bearing examples within the Goudreau-Lochalsh deformation zone (Island Gold) and Manitou’s Goudreau property (Tracanelli showing). To better inform the machine learning system and further refine our search area within deformation zones, the existing 1:50k geological map was refined to a 1:35k scale, with a focus on accurate contact mapping (see below). Such contacts were identified in the 2019 mapping at the Patents Property (see below) and were an important feature in the machine learning prospectivity analysis.

Once all of the maps and models were generated, a series of variables were extracted and used in the integrated prospectivity analysis. This analysis trains machine learning algorithms to predict the presence of gold using all variables (features). Once the model performs to a satisfactory level, results produced include: 1) a series of zones with high probability of containing gold, illustrated in the map above as a series of hexagons; and 2) a ranking of feature importance for each input feature.

As demonstrated, prospectivity analysis of the Goudreau Lochalsh area was a multi-step process which involved significant field work and collaboration between the different geoscience specialists. GoldSpot is pleased to observe that one of its highest priority targets at the Patents Property may prove to be a significant blind zone of mineralized quartz vein (see below) and is looking forward to see the results from its other prospective areas on the Patents Property and surrounding Goudreau Project. 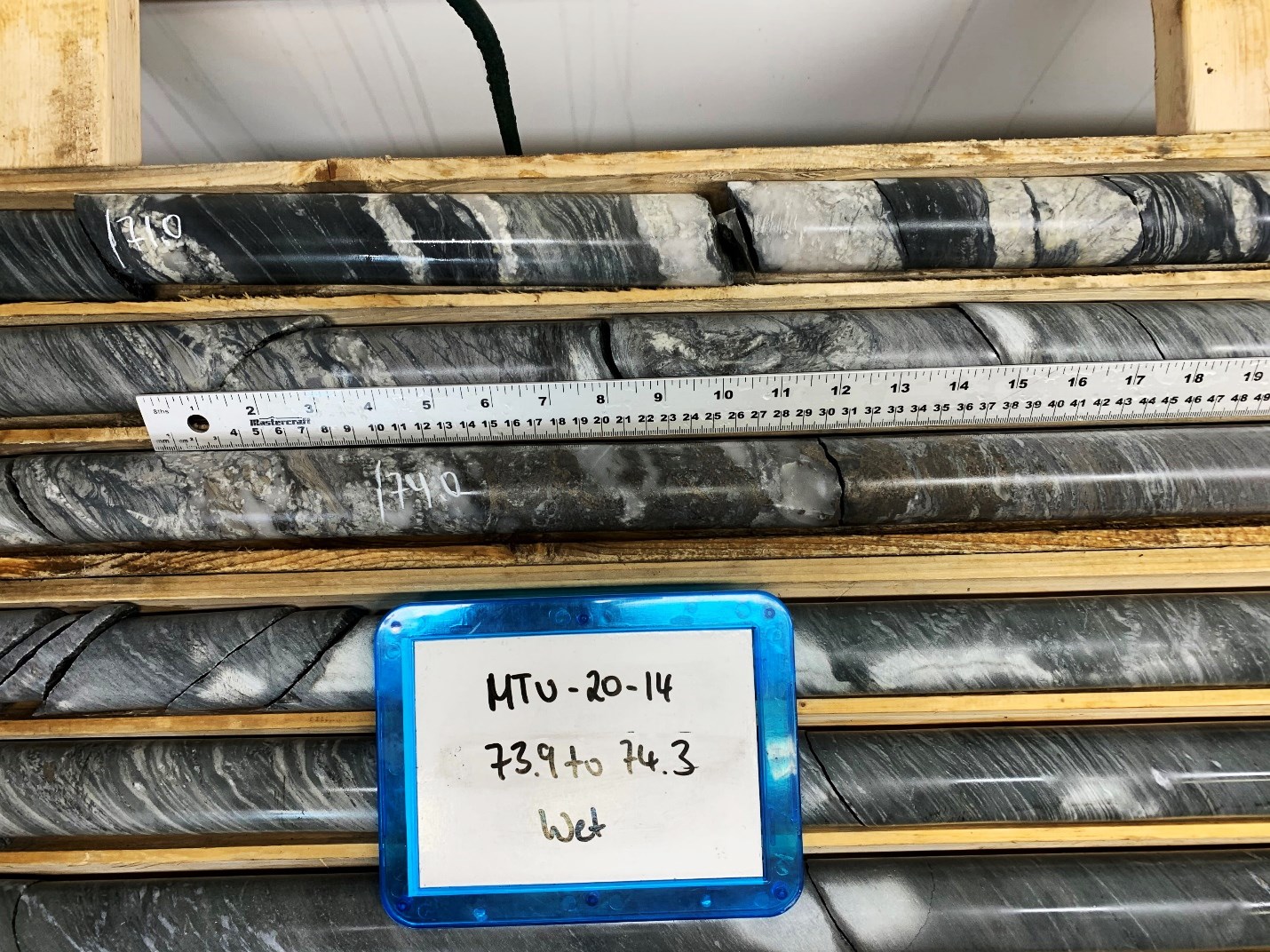 Quartz-carbonate±pyrrhotite veins in strongly altered mafic volcanic rocks from initial drilling at the Patents Property described in this press release.

The technical information in this press release has been prepared in accordance with the Canadian regulatory requirements set out in National Instrument 43-101 (Standards of Disclosure for Mineral Projects) and reviewed and approved by Lindsay Hall, professional geoscientist (APGO # 0891), a Qualified Person as defined in NI 43-101.

According to Manitou Gold and their press release, the third hole, MTU-20-14, intersected the vein zone at a vertical depth of approximately 50 m below surface and returned 12.8 g/t Au over 0.5 m within a wider interval of veining and intense alteration.

The four drill holes at the Patents have been drilled on two sections with a lateral spacing of 550 m. All four holes intersected a wide shear zone with intersections up to 50 m in width, with such intersections displaying a similar style of alteration and hosting mineralization consisting of pyrrhotite, pyrite and minor chalcopyrite, along with quartz veining. Results reported herein represent partial results for three of the holes and additional assays will be released as they become available.

Core sampling was completed on select intervals ranging from 0.1 to 1.0 m. Samples were cut in half with a core saw and half-core samples were individually bagged, sealed and labelled; the other half core was placed back in the core box and is retained on site for verification and reference purposes. Standards and blanks were routinely inserted into the sample stream. At least 20 per cent of the samples submitted to the laboratory comprise samples used for quality control.

Samples were delivered to Activation Laboratories in Thunder Bay, Ont. At the laboratory, samples were crushed up to 80 per cent passing two millimetres, riffle split (250 g) and then pulverized to 95 per cent passing 105 microns. Gold was analyzed by fire assay with an AA finish, using the 50 g subsample. Overlimit analysis was performed on all primary assay results over three g/t gold. All overlimits were tested by fire assay with gravimetric finish using a 50 g subsample. Actlabs is a certified and ISO 17025 accredited laboratory. Actlabs routinely inserts certified reference materials for at least 20 per cent quality control in each batch.